Longleaf ecosystem conversations are usually about above ground attributes: plant diversity, wildlife composition, timber growth, recreation, etc.  Less frequently, we consider out of sight, below ground fauna, nutrients, mycorrhiza, and all that stuff in the dirt.  But it is the soil that supports and delivers the above ground forest and the water flowing from the land.  At our recent Texas Longleaf team summer meeting, we devoted time to examine the soil/rainfall infiltration relationship.  We were hosted by the USDA Plant Materials Center southeast of Nacogdoches.  The center has several USDA Natural Resource Conservation Service staff onsite that work on soil health and projects including plant propagation.  The center also hosts a dynamic partnership with Tyler Wayland, “the East Texas Natives Project”, as they develop a future supply of plants native to east Texas forests.

Alan Shadow, center director, provided a demonstration of the NRCS Rainfall Simulator.  The simulator allowed us to see rainfall effects on four undisturbed soil profiles collected at the center.  Three of the profiles had herbaceous groundcover: native forest, native grassland prairie, and bahia pasture.  The fourthe profile was unvegetated tilled soil.  The simulator provided a 15 minute “rain shower” which soaked the soils at an even rate.  The outcome was a powerful illustration on the importance of what could be termed a “healthy soil”.  I was hoping the simulator showed how a healthy soil will absorb rain, moving moisture deep within the profile.  A healthy soil will provide proper eco-system function, decreased erosion, and extreme rainwater infiltration.  I was not disappointed; in fact, I was amazed to see clearly how little water ran off native prairie in 15 minutes.  The almost clear runoff, when it did occur, was after the profile absorbed and filtered the rain.  As Mr. Shadow explained, the soil contained a functioning ecosystem below ground where there was a complex interaction between bacteria, fungi, and organic matter during decomposition and nutrient cycling.  The functions create exudates that bind soil particles and stabilize pore space in the soils.  Soils that are undisturbed with diverse plant communities support greater biologic activity.  The actions bind soil particles together and allow water to infiltrate rapidly.  We saw this clearly in both the native grassland soil and the native forest soil that had a cover of native herbaceous plants.

Rain infiltration was distinctly different in the two other soils: bahia pasture and tilled soils.  Both of these soil profiles almost immediately produced brown, sediment-filled run-off.  After the “rain” fell on the bahia covered soil for 15 minutes, Alan flipped the bahia profile over to show us how little moisture had infiltrated.  Bahia pasture sod proved to be a poor cover for infiltrating rain into the soil.  The tilled soil also performed badly.  It had virtually no internal biota, “melted” with rain, and dumped mud rapidly into the collecting jars.

The NRCS rainfall simulator is mobile and staff can bring it to help deliver the messages of soil stewardship.  I found it to be a great conversation starter and useful in helping owners consider alternatives for soil and water stewardship.

So, let’s consider the native herbaceous plant roots typical of the longleaf forest.  Borrowing website photos and sketches to illustrate my point, big and little bluestem have roots that can extend 6 to 8 feet deep.  Those roots have several functions including transporting above ground atmospheric carbon and storing it many feet below ground.  Portions of the roots die back each year and contribute organic matter and nutrients below ground.  Many other deep-rooted perennial grasses, i.e. Indian grass, switch grass, paspalums, and native forbs, perform similar deep-rooted functions in the longleaf system.  One forb, gay feather, has roots that extend 14 feet.

Contrast that with the rooting activity of a pine stand which is thickly infested with yaupon.  Two species’ roots dominate the subsurface area: pine and yaupon.  I could not find specific studies that measured the soil health difference when the rooting area has only roots of pine and yaupon.  My opinion is that the lack of herbaceous diversity decreases soil ecosystem function.  It was the complex of entwined roots of many species that showed the amazing biologic function we saw in the prairie profile tested at the plant materials center.  A monoculture of one sod grass, bahia, had very poor evidence of soil health.

I am not offering a forest management prescription and please seek a professional consultant for stand management guidance.  I do offer my opinion.  When owners improve the composition/diversity of a forest’s groundcover, they then improve soil ecosystem function. A former longleaf range in east Texas is mostly covered in loblolly plantations with a dense yaupon understory and virtually no herbaceous groundcover.  In that situation, owners would need to control competing mid-story shrubs (e.g. yaupon) to improve the diversity of groundcover species.  Prescribed burning and thinning can help open the stand to enjoy a rebound of herbaceous plants within a more open pine stand.

Many have described the longleaf system at the time of Anglo settlement as being a vast open forest with a groundcover of diverse plants – a forested grassland.  The western region of the longleaf forest was covered with many prairie plants found today in east Texas and stretching further west into some of central Texas.  Photos of our longleaf system from around 1900 show an open understory dominated by grasses.  I think that is a good clue that east Texas was part of that forested grassland.

So, I am going to ramble a bit …...I grew up west of Interstate 45 in the prairie country and lived on small ranches in Collin, Parker, and Erath Counties.  I first met Big Bluestem east of Stephenville but also found it at 4,000 feet in the Appalachians and in the coastal Carolinas (with some genetic variation).  I discovered that grasses I grew up with on the Texas prairie occurred across most of the southeast.  I also learned that they performed a sub-surface ecosystem function much as they contributed to the ecosystem within the longleaf understory.

In 1964, my folks bought a farm west of McKinney.  We left north Dallas and began a country living experience when I was 10.  Life on a cattle ranch launched my love for land stewardship and a desire to become a wildlife biologist.  McKinney, from the 1940’s and into the mid 1960’s, was a farm town surrounded by fields of cotton, milo, and cattle.  Collin County was historically tall grass prairie, dominated by big bluestem, switchgrass, and Indiangrass.  The early settlers had plowed under the prairie in the 1800’s and the land has since been altered.  The previous owner of our place had converted the eroding farm land in the 1950’s to bermudagrass and terraced the land “to save the soil” under a government program.  The soil needed saving, since it was estimated that 90% of the original top soil of America’s prairie had been lost through cultivation.  The remains of the prairie sod, once filled with 10 feet deep grass roots, was now being held together by roots 6 inch deep.  We raised cattle and hay on that “improved” bermudagrass.  Though better than a concrete surface, our pastures shed rainwater in torrents and our soils did not infiltrate water to recharge the natural springs.  Wildlife was scarce and hung on only in the unimproved draws and ravines.  I wish that the government had explained how to have native prairie and a successful cattle operation but that was not the message in north Texas in the early 1960’s.  Dad was busy with his full time job, flying planes, and may not have listened to a government agent anyway.  He managed land the way most people in the area did.  Since the 1960’s, most McKinney farms have shrunk dramatically and given way to the growth of Dallas, just like Houston, Austin, San Antonio…..

I read recently that only 3% of native prairie remains in the US.  It is easy to imagine when flying around Houston and Dallas what became of that other 97%.  The pastures have become subdivisions, roads, and parking lots.  The prairies that remain are mostly in bermuda and bahia grass or the terrible non-native, invasive grasses such as king ranch bluestem.  The upstream watersheds of former forested or prairie creeks no longer deliver clean water.  The urban creeks have been engineered and confined to narrow spaces armored with concrete to keep their flow out of the developments.  And when it rains hard, the run off starts almost immediately and the creek rise is sudden and sometimes catastrophic.  I also know that the runoff going into those creeks looks worse than the bahia grass soil profile from the rain fall simulator.

On a more upbeat note, we can appreciate our East Texas forest owners.  We are fortunate to have land stewards that maintain a healthy forested cover on their land and those that encourage a diverse groundcover of forbs and grasses.  Most of our rural east Texas lands still deliver clean water into the streams of our forested lands.  My favorite of all is a forest with a diverse ground cover of herbaceous plants – the best of both worlds.

Additional reading on the subject:

Prairie systems contain much more soil organic carbon than other ecosystems due to rooting characteristics of the vegetation that grows there.  Globally, 34% of all carbon in terrestrial systems (vegetation and soils) is contained in grasslands.  Unlike forests where vegetation is the primary store of carbon, grasslands store most carbon in the soil.

A stable and clean water supply is one of the major forest ecosystem services that watershed managers value (Brown et al., 2008).  Forests, managed or unmanaged, provide the best water quality along all land uses in the United States (Brown, 1980; Binkley and Brown, 1993), especially when forestry best management practices are used (Edwards and Williard, 2010)…. See the article for citations.

Nebraska educator standing next to bluestem grass contrasted to annual grain crop root depths. (From the images of the tall grass prairie center) 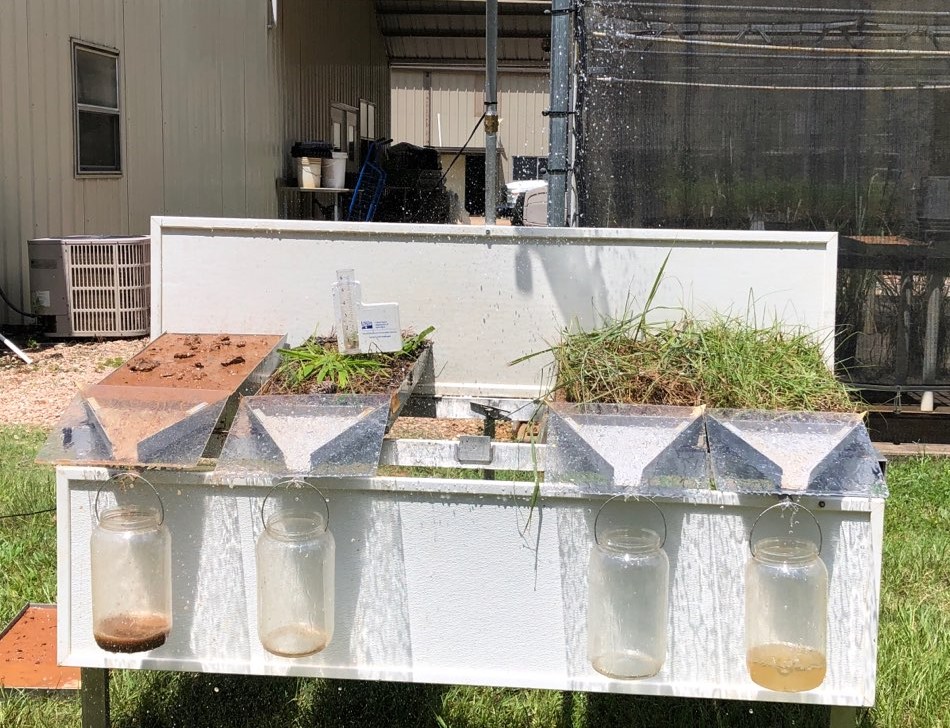 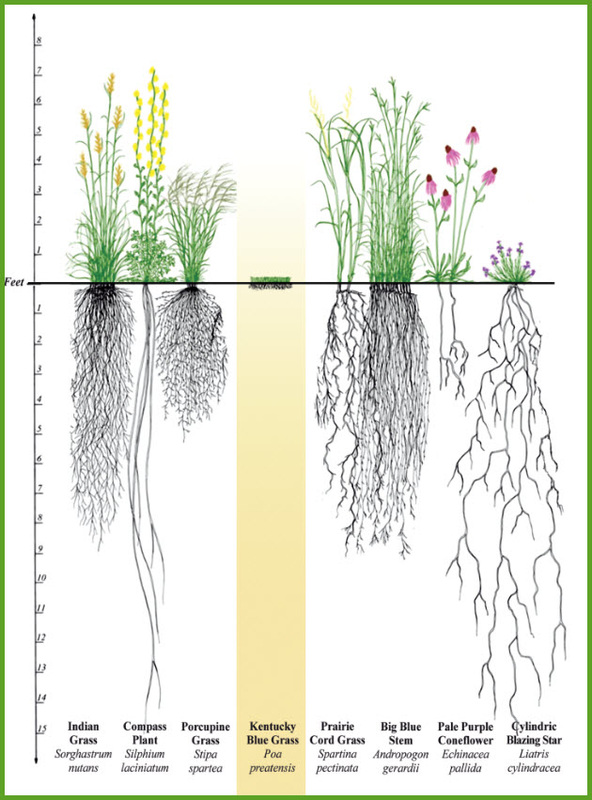 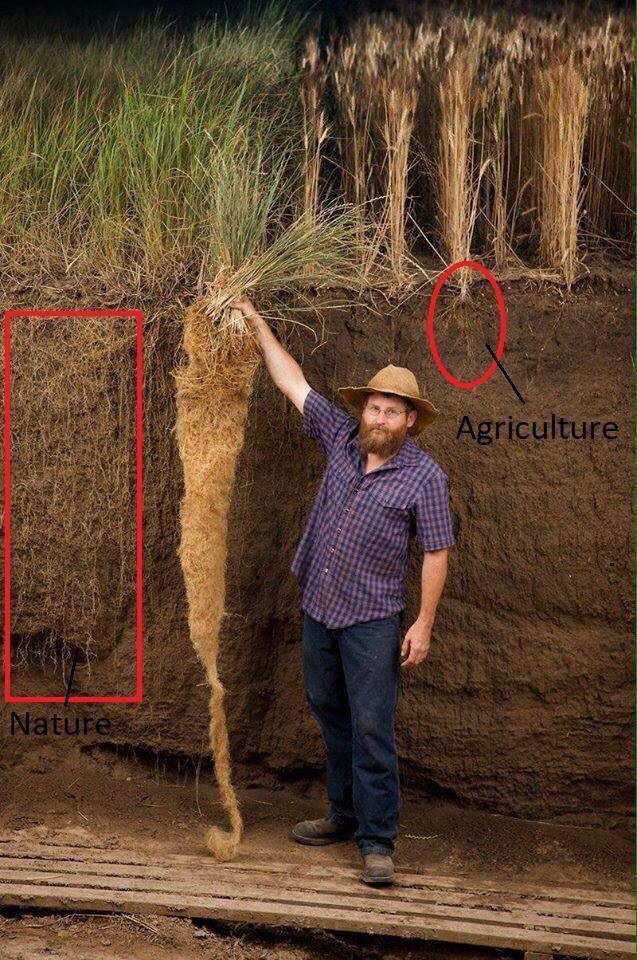 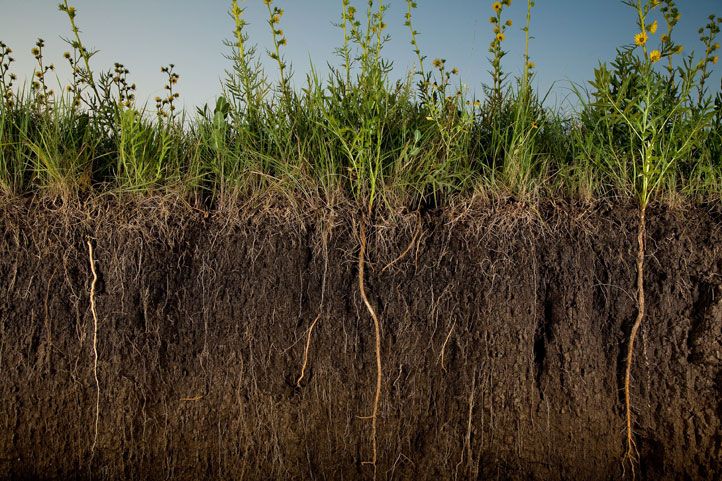