Hurter’s Spadefoots are explosive breeding frogs that migrate en masse to the ponds of their birth following heavy rainfall. Their tadpoles develop incredibly quickly, metamorphosing into froglets in just a few weeks. This rapid development allows them to capitalize on significant rain events in areas with inconsistent and unpredictable rainfall patterns by breeding in small, quickly drying water sources that other amphibians are unable to utilize. Spadefoots are named for a spade-like projection on their hind feet that is used to dig through the sandy soils of their habitat. During hot, dry months, spadefoots will dig relatively deep into the ground where they will aestivate, or enter a state of dormancy, until wetter, cooler weather returns. The spadefoots’ life history allows them to exist in the sandy, droughty soils of longleaf pine savanna where water is often a precious resource. 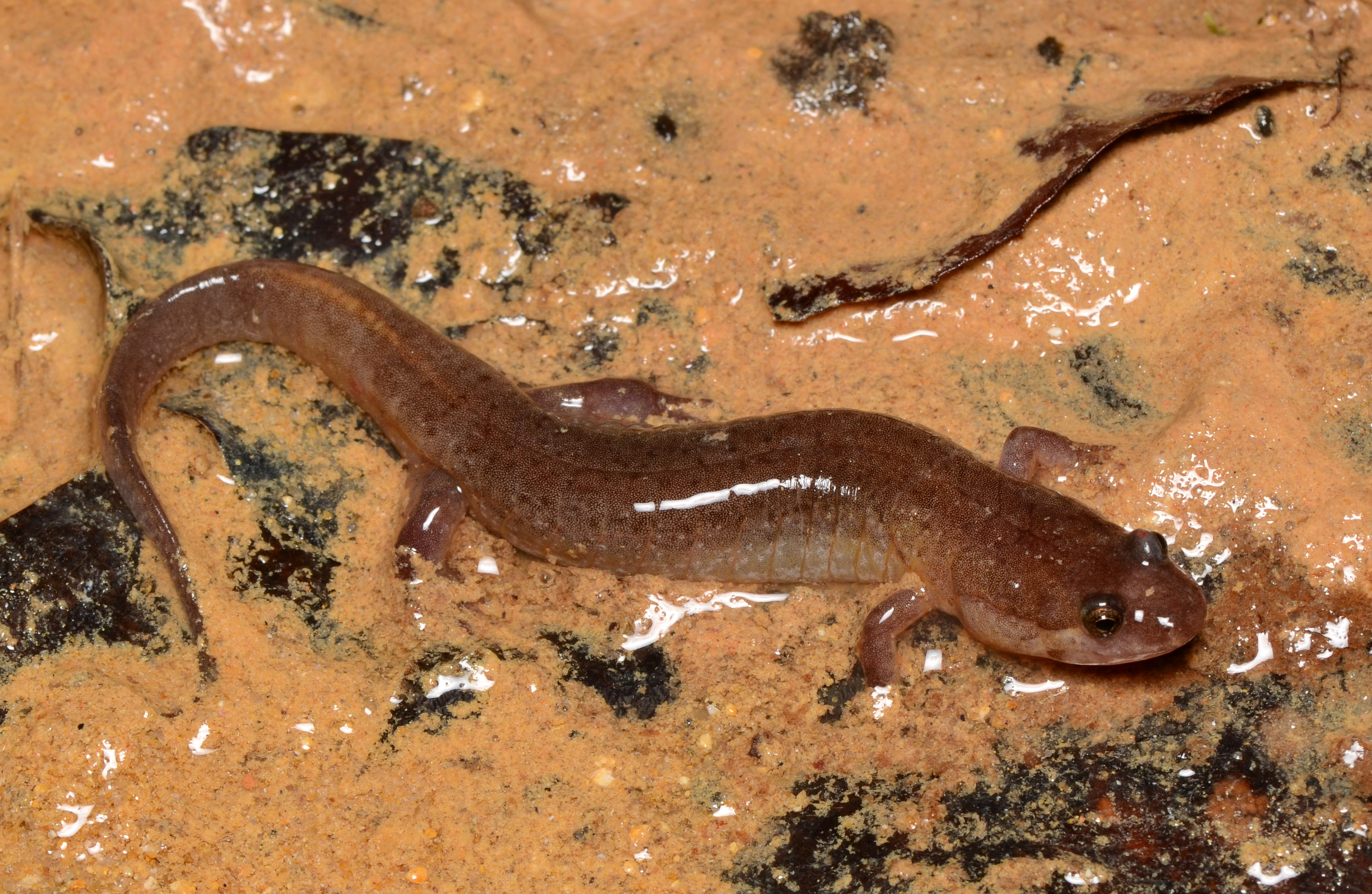 The Spotted dusky salamander is a small, stout bodied, reclusive salamander that spends most of its time seeking refuge beneath rotten logs, leaf litter and other decaying organic matter.  Adults are generally between 3-6 inches long.  Dorsal coloration is usually dark black but may be white, gray, or tan.  A single or double row of red or orange dorsal spots between the front and rear legs is present on some individuals.

While once widespread throughout east Texas, Spotted Dusky Salamanders have declined significantly and are now restricted predominantly to the longleaf pine belt in deep East Texas. Dusky salamanders are most often found in baygalls, spring heads, spring fed streams, and forested seeps that are nestled amongst the longleaf pine hills.  They may occasionally be found in cypress swamps and sloughs in southeast Texas.  A preference for spring fed, sand-bottomed streams with abundant decaying organic matter has been shown.  Dusky Salamanders may occasionally be found beneath natural cover and scurrying across the ground on warm humid nights.

Reproduction in Dusky Salamanders occurs in late summer in Texas.  Females have been found guarding eggs from July-October.  Eggs are laid undercover adjacent to the water.  After hatching, the larvae will make their way to the water where they will remain as larvae until the following spring.

Several causes are thought to have led to the decline of the Spotted Dusky Salamanders in Texas.  Suspected causes of decline include habitat loss, habitat alteration, increased sedimentation in aquatic habitats, disease, feral hogs and drought.  In Texas, the Spotted Dusky Salamander is classified as a Species of Greatest Conservation Need.  Additional research and surveys for this species are needed to better understand their current distribution and causes of decline. 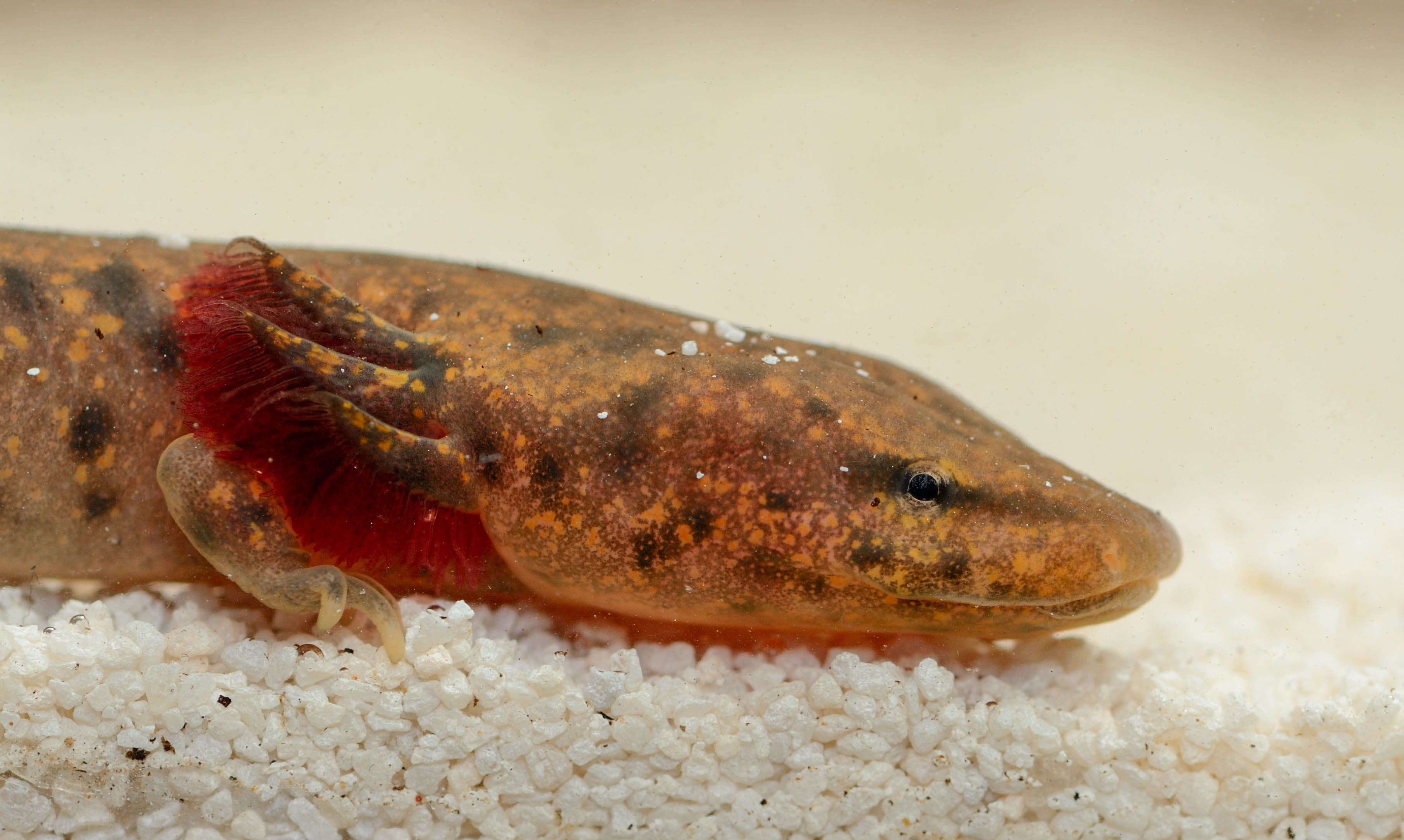 The Gulf Coast Waterdog is a medium sized, fully aquatic species of salamander that occurs in small to large spring fed, sand bottomed streams.  Water dogs are extremely reclusive and spend significant amounts of time seeking refuge in leaf packs, log jams, aquatic burrows and other accumulations of natural debris in the water.  Adults are 6-9 inches long with a tan to dark brown dorsal coloration with small dark colored spots randomly spaced across their back.

Gulf Coast waterdogs are nocturnal and seasonally active from fall through early summer.  Peak periods of movement occur from November through January, while they spend most of their time in burrows or submerged in leaf packs during the hot summer months.  Reproduction occurs in the winter months, and in late May, females will deposit their eggs under logs, rocks or other aquatic debris.  Additional research is required on this species to determine the current distribution and stability of this species in Texas.  It is thought that local declines have occurred in some places, most likely due to siltation of streams, habitat alteration and pollution.

Streamside Management Zones (SMZs) are essential in protecting aquatic habitat from siltation during timber harvesting and other management activities. 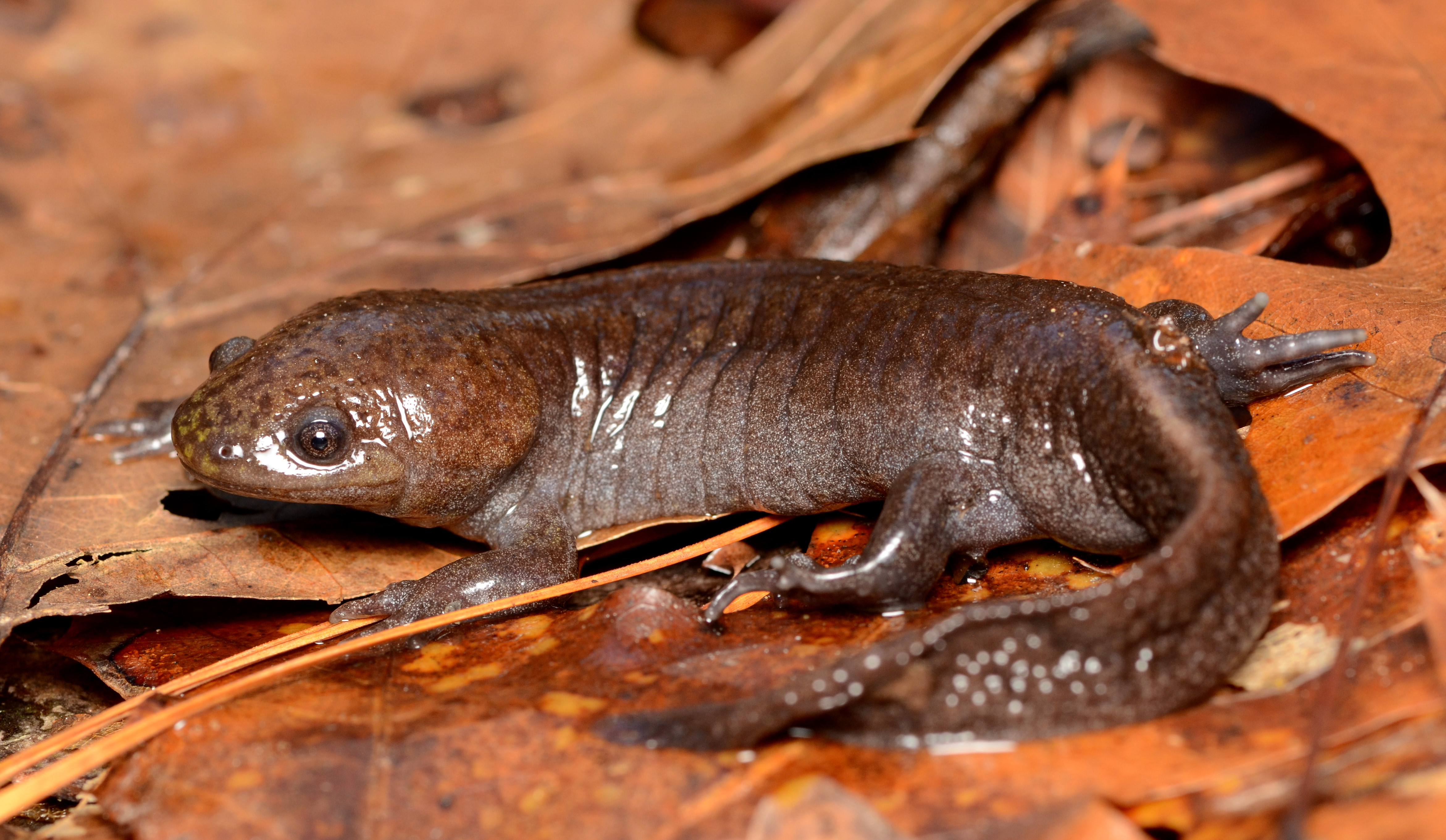 The Mole Salamander is a small to medium sized terrestrial species of salamander.  Mole Salamanders are seasonally active, emerging for only short periods of time during winter months when seasonal rainfalls fill their breeding ponds.  It is during the winter months when Mole Salamanders can most easily be found, occurring in small, seasonally flooded fishless ephemeral ponds, as well as in perennial fishless ponds.  Terrestrial adults may occasionally be found taking refuge under natural cover adjacent to the pounds such as logs and downed trees.  Breeding ponds most often utilized by Mole Salamanders are found in longleaf pine uplands or mixed oak pine uplands.  A clayey bottom and an accumulation of organic debris for them to take cover in during the day are important features of breeding ponds.  In Texas, breeding typically occurs between December and February.  During these months, frequent rain events fill the Mole Salamanders’ breeding ponds.  During particularly warm winter rains, the salamanders will migrate from their burrows in the uplands to the same breeding ponds where they first hatched from eggs.  Populations of mole salamanders appear to be stable in Texas.  Habitat alteration is the main threat facing mole salamanders.