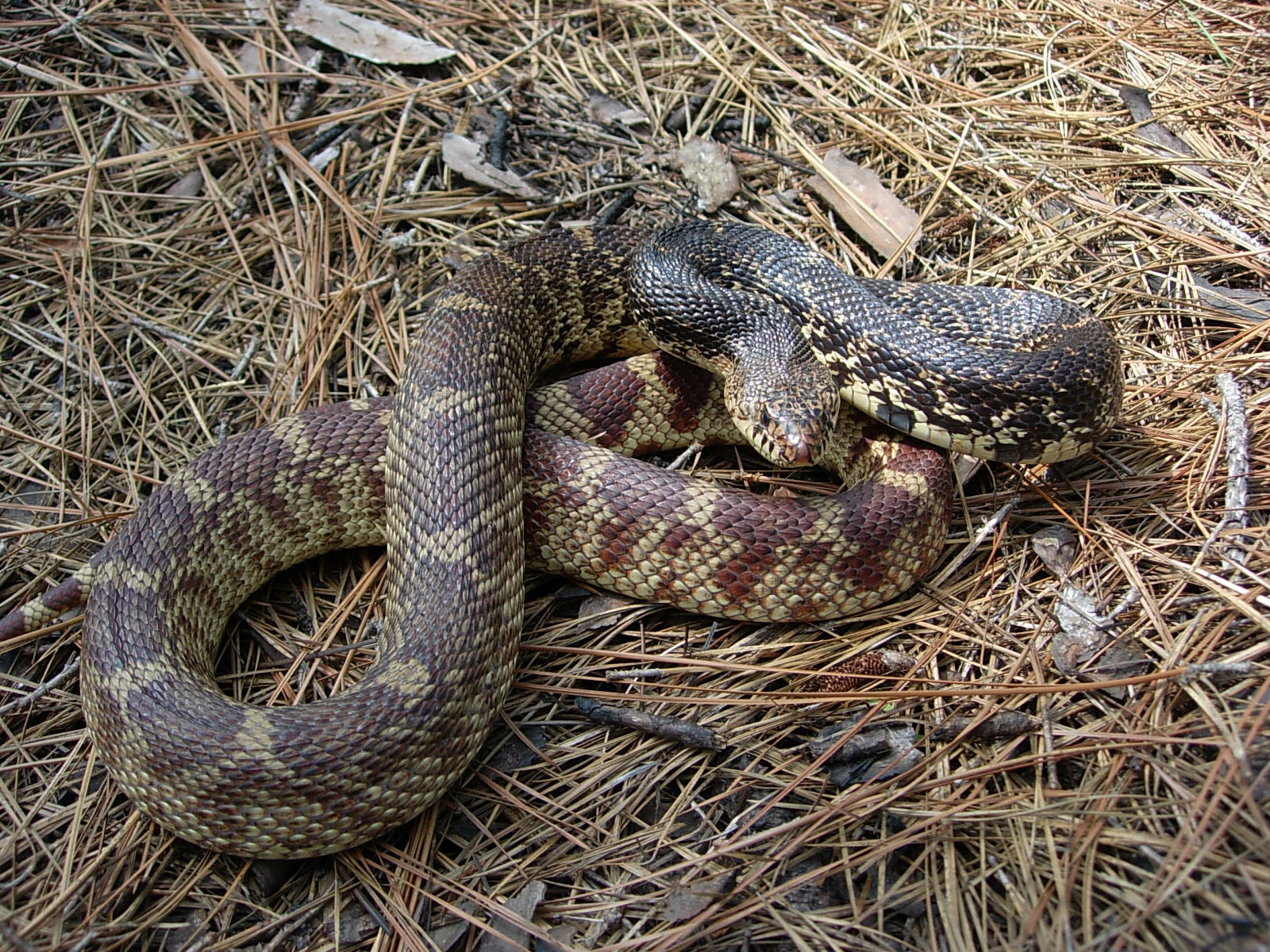 The Louisiana Pine Snake is endemic to the west gulf coastal plain where it occurs in longleaf pine uplands and open sandhill forests of eastern Texas and western Louisiana.  They are large, stocky snakes, capable of reaching five feet in length, known to have the largest eggs and hatchlings of any snake native to the U.S.

Pine snakes are highly fossorial, meaning they spend the majority of their time underground.  They have a close relationship with Baird’s Pocket Gophers (Geomys breviceps), which serve as their primary food source.  The snakes also utilize established pocket gopher burrow systems to move about beneath the sand.

Louisiana Pine Snake populations have declined dramatically over the last century, partially due to a combination of habitat loss and degradation.  Much of the prime upland sandy soil habitat for the snake has been directly lost to development and land use changes. In other areas fire suppression has altered or eliminated the habitat for the pocket gopher – the diet mainstay of the Louisiana pine snake.  Pocket gophers use the open forest floor with patches of bare ground and areas of grasses, forbs, and wildflowers as their habitat.  As a result of these declines, the Louisiana Pine Snake has been listed as threatened by the U.S. Fish and Wildlife Service. 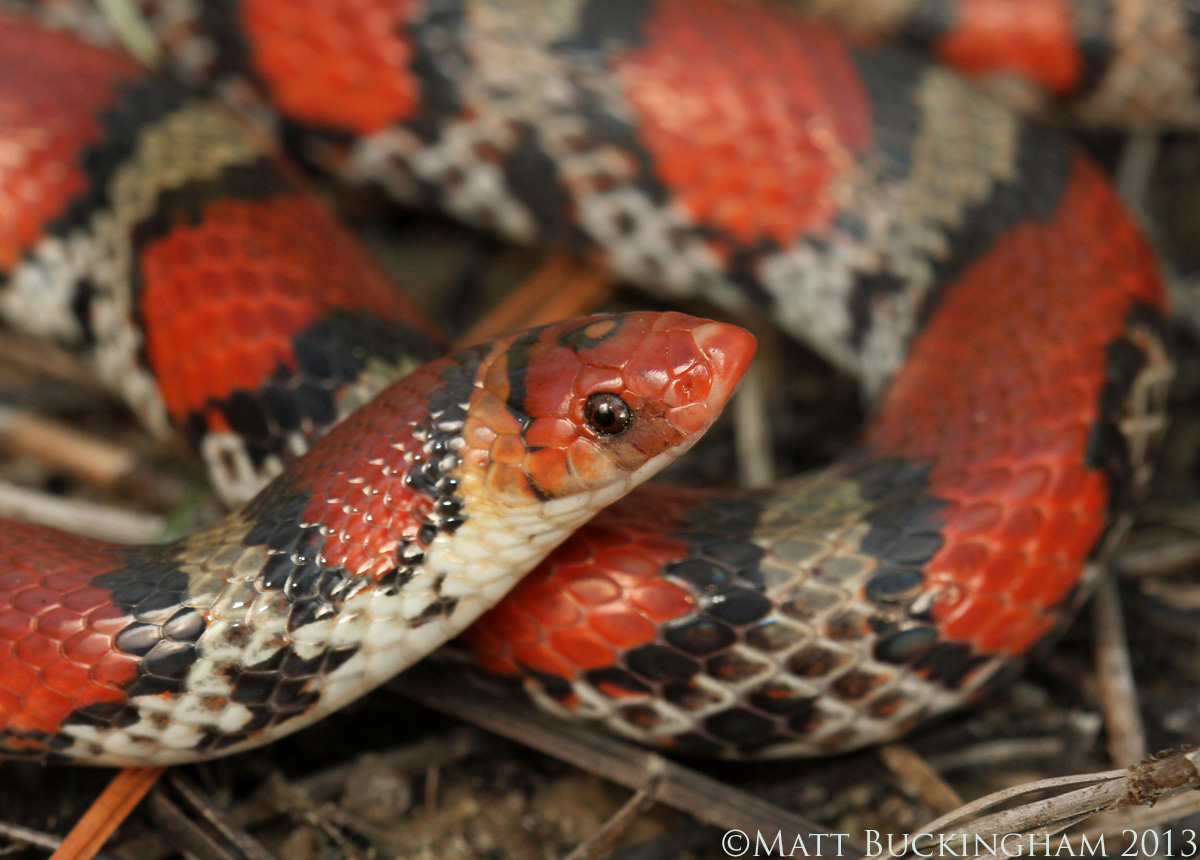 Scarlet snakes are specially adapted for burrowing and spend most of their time below ground.  They have an enlarged rostral scale (large scale at the end of the snout) that aids in “digging” through the sand.  In east Texas, they are most readily observed on the surface in early summer, coinciding with the peak season for reptile nesting.  During this time, they seek out their favorite prey: reptile eggs.

In the Pineywoods of east Texas, Northern Scarlet Snakes are restricted to longleaf pine savannas and xeric sandhills.  They prefer microhabitats with deep sands and open understories.  Though they may be locally common, they are seldom observed and have been heavily impacted by habitat loss.  Because of this, they are listed as “threatened” by the Texas Parks and Wildlife Department. 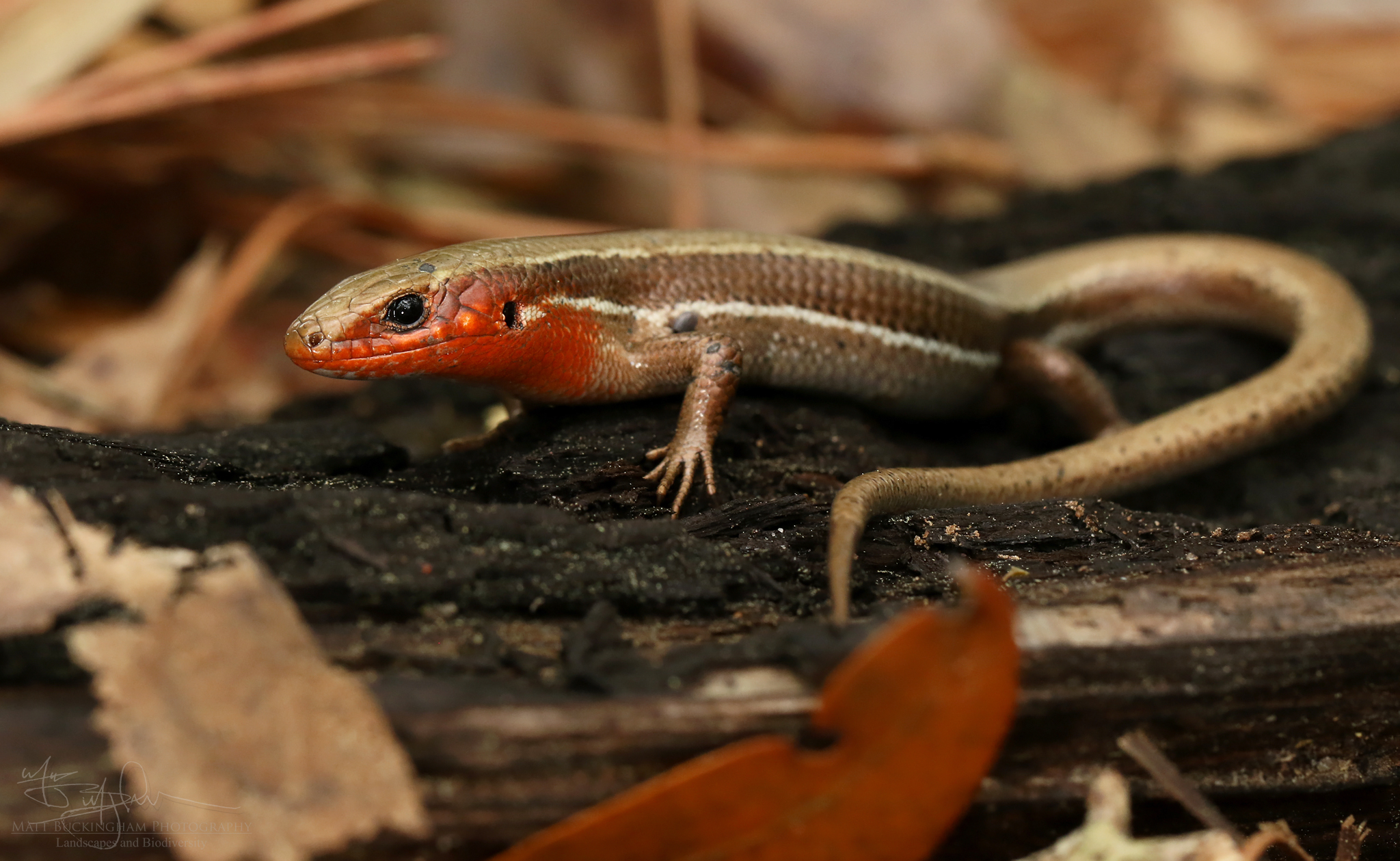 The Southern coal skink is a secretive lizard that reaches the southwestern extent of its range in east Texas.  Here it occurs in upland forests over well-drained, sandy soils.  They can occasionally be seen scurrying across the leaf litter of longleaf pine savannas.  They are highly secretive and are quick to disappear under leaf litter or into downed woody debris when approached.  Thanks in part to this secretive nature, little is known about coal skinks in Texas.

Like many skinks, juvenile coal skinks have blue tails.  It is believed these bright tails direct the attention of potential predators away from the head and other more vital body parts.  During the breeding season the head and throat of male coal skinks turns bright orange.  It is possible that this coloration helps with mate attraction, and females may seek out males that display the brightest orange.

Though it is not included on state or federal threatened and endangered species lists, the coal skink is considered a species of conservation concern by some.  This is due in part to the lack of information on population dynamics in the state.  Research into their range and habitat in Texas could help increase our understandings and determine conservation priorities for these interesting lizards. 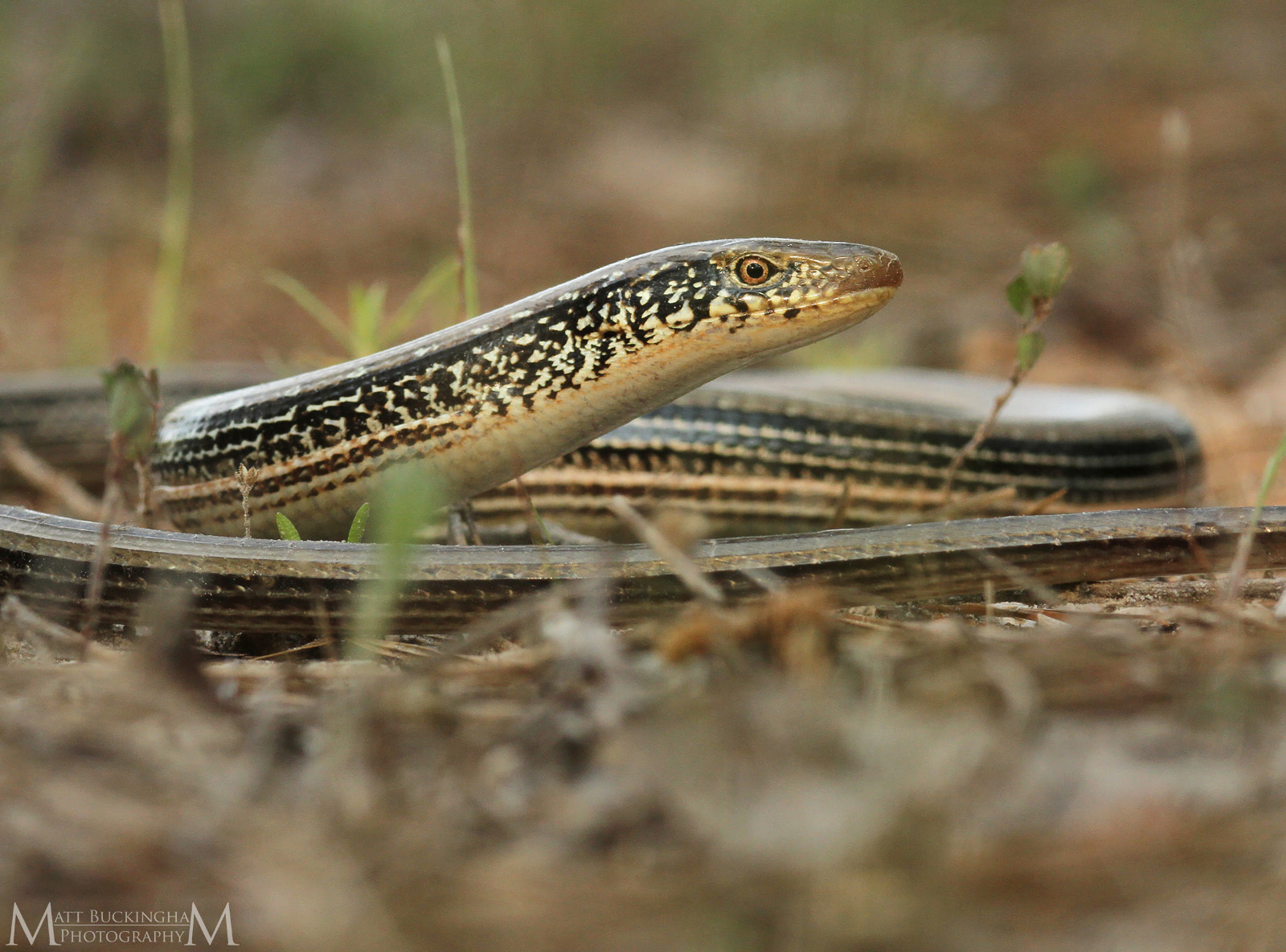 The genus Ophisaurus is derived from the Greek ophis (snake) and saurus (lizard).  Indeed, though it may lack external limbs, and for all intents and purposes looks like a snake, it is in fact a lizard.  When examined closely, the eyelids and ear openings give it away, as these traits are not found in snakes.

The common name glass lizard comes from the genus’s propensity for caudal autonomy.  This is the familiar action of a lizard dropping its tail in response to a predator threat.  In the glass lizard, however, the tail makes up over half of its body and contains several fracture points.  This can result in an individual seeming to break into pieces when being captured by a potential predator.

Glass lizards inhabit prairies and open savannas where a dense grass layer provides ample cover.  They literally “swim” through the grasses as they move through their territories.  They are considered a species of greatest conservation need by the Texas Parks and Wildlife Department, and evidence indicates that their population may be declining in parts of the state, likely as a result of habitat loss. 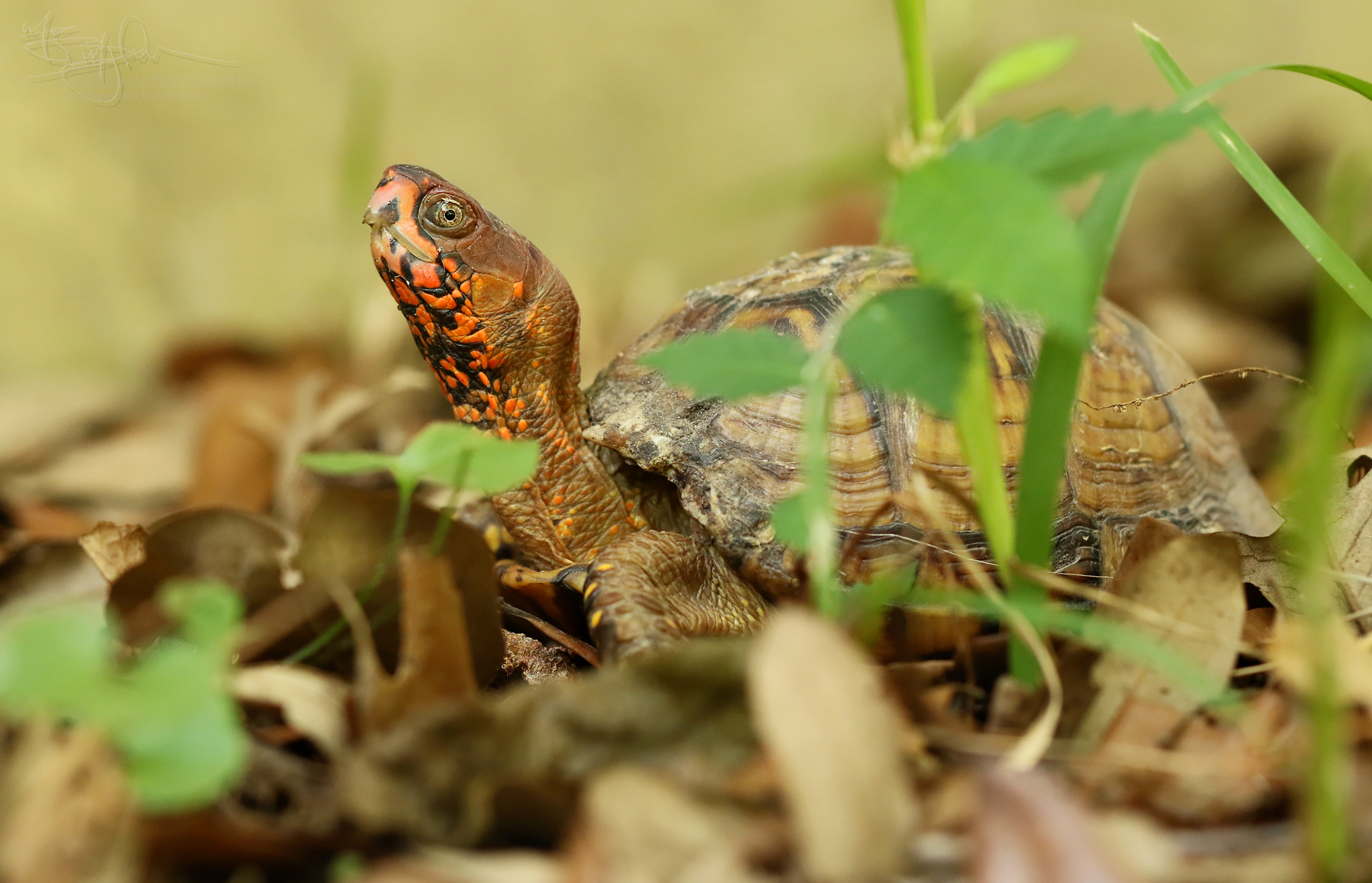 The three-toed box turtle is the subspecies of eastern box turtle (Terrapene carolina) that occurs in the eastern half of Texas. They inhabit a variety of habitats but are most often found in mature hardwood and mixed pine-hardwood forests. They may occasionally wander into longleaf pine savannas near the transition zone with mesic slope forest or braided streams lined with hardwoods such as American beech and southern magnolia. Box turtles are named for their hinged plastrons (the bottom part of their shell), which they are able to close up to protect their head, legs, and other soft tissue. Three-toed box turtles are highly variable but often exhibit various degrees of yellow and orange spotting on their heads. 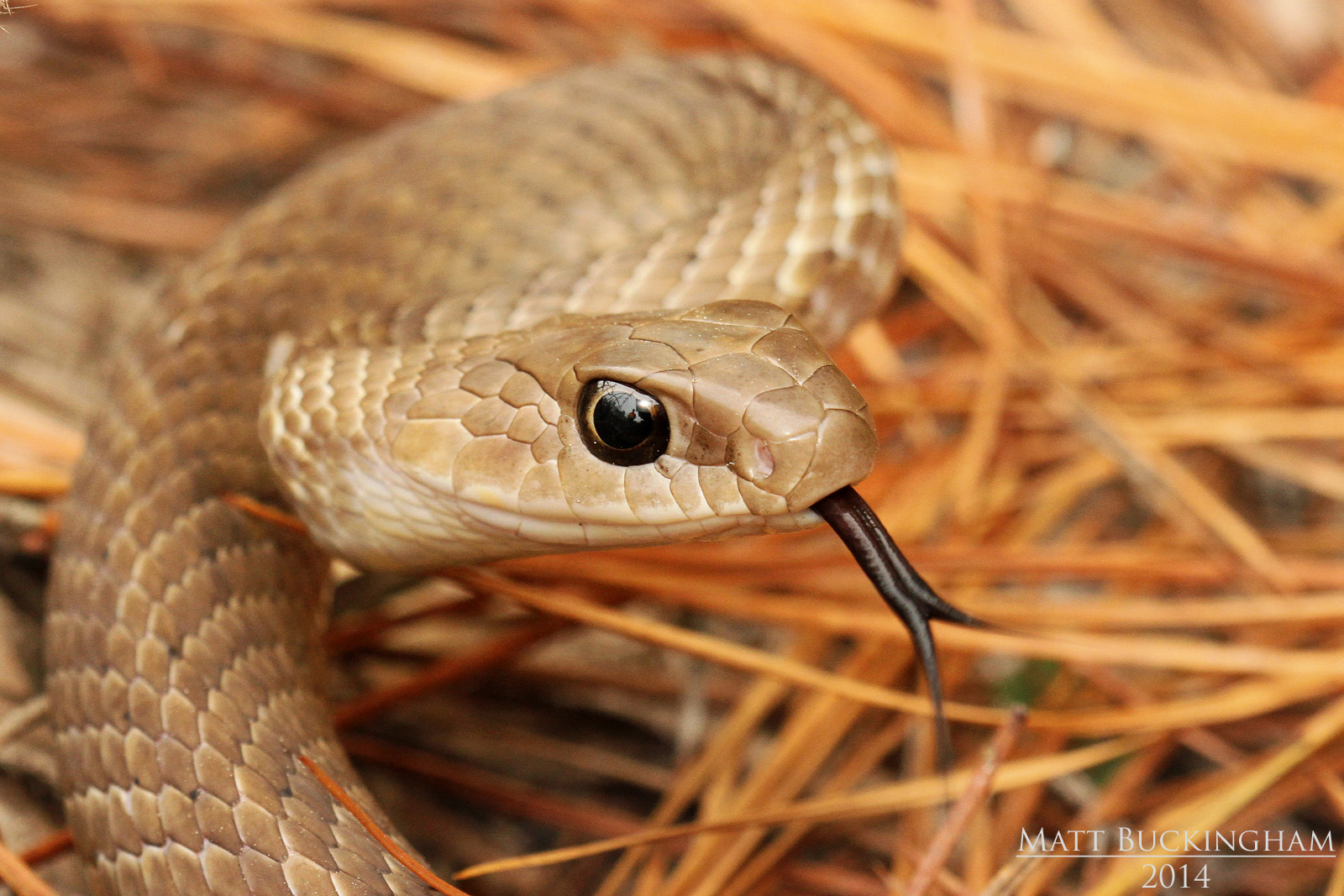 Tan racers are one of several subspecies of racer (Coluber constrictor) native to Texas. This subspecies is highly range restricted, occurring in only a handful of counties in extreme eastern Texas and western Louisiana. Their habitat here is closely linked to longleaf pine. In the heart of their range, in Hardin and Tyler Counties, most individuals are solid tan. Near the edges of their range in Liberty, Newton, Sabine, and Angelina Counties, individuals often show influence from the buttermilk racer (C. c. anthicus) and may show various degrees of white and bluish speckling. Racers are aptly named and quickly escape potential predators by moving at high speeds across the forest floor.